Does this June scorcher make a July and August meltdown inevitable?

With one of the hottest 7-Day Forecasts the WBRZ Weather Team has issued in recent history (we checked), questions are mounting about what this heat streak means for the rest of summer. While the historical and statistical data overall do not support the idea that June heat is a precursor to a sizzling summer, it has happened before, and there is some evidence to say it could happen again—this year.

July and August temperatures following a top hot June in Baton Rouge have been unremarkable in historical context. There is one big exception and that was in 2011—the second hottest June on record. What followed was the hottest July and August combination on record during what was, unsurprisingly, the hottest summer on record (more on that shortly).

How can this be? How does the heat just suddenly ease? To understand that, it is important to know what is responsible for the heat.

Often, long warm spells are created by a persistent upper level ridge of high pressure. This creates a large pocket of warm, sinking air aloft. Not only do those sinking motions stop cooling showers and thunderstorms from developing, but also, sinking air itself warms and that further warms the surface temperatures. That explains why it is hot, but not why it doesn’t stay hot. 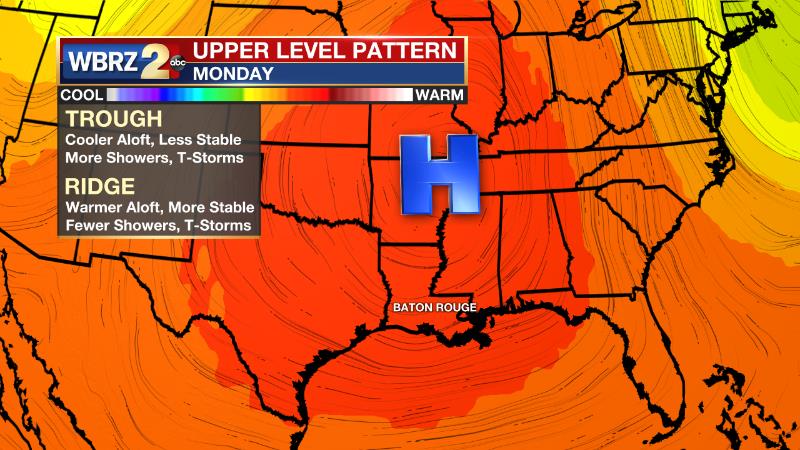 These ridges of high pressure (and their counterparts, troughs) are just part of a larger circulation in the atmosphere, around the planet. Since the atmosphere is fluid and constantly in motion, these ridges simply move after a while. The can set up shop for days, sometimes even a few weeks, but almost never months at a time. However, in some years, like the brutally hot summer of 2011, ridges can rebuild more quickly and be a dominant part of the weather pattern.

On the Gulf Coast, “a hot summer always follows a hot June” is not a standard in weather, but an exception—like 2011, this year may well turn out to be one of those exceptions. You can’t help but notice two eerie similarities between the setup heading into this summer and what played out in the sweltering summer of 2011. Both years fell in the second summer of a La Niña episode and saw much of the Southern U.S. in significant drought.

Any discussion of a long lasting weather pattern must consider the larger climate forces first. La Niña (opposite El Niño) is frequently responsible for warmer and drier than average conditions across much of the United States. The outlook for summer 2022 suggests just that, as we are in the midst of a La Niña that has persisted for the better part of two years. The Gulf Coast knows all about La Niña summers that can result in hyper-active hurricane seasons—which we have seen since the onset of this event in 2020. Typically these phenomena span for about two to three years and so this one should be winding down in a matter of months.

One more big contributor to the 2011 heat wave was a persistent drought. Drought makes extreme heat more likely, as a region with dry soil can warm more than one with wet soil. There is an ongoing drought over the region again here in 2022, but it is comparatively less severe than in 2011.

So how do we know this is literally one of the hottest 7-Day Forecasts we have issued? Easy answer—because what we are forecasting has rarely happened. A significant run of hot temperatures will begin this weekend and last for much, if not all, of next week. Barring unforeseen showers and thunderstorms, most locations should hit at least 97 degrees, each day. The Capital Area has only reached at least 97 degrees for seven or more consecutive days seven times in history. Only one of those stretches occurred entirely in the month of June, back in 1963.

It is possible that one or two spots, including Baton Rouge, makes it to 100 degrees for the first time since August 10, 2015 and the first time in June since 2012. The 100s are not very common in south Louisiana as the typically humid air does not warm (or cool) as efficiently as dry air. Metro Airport has reached 100 degrees 56 times since 1930. 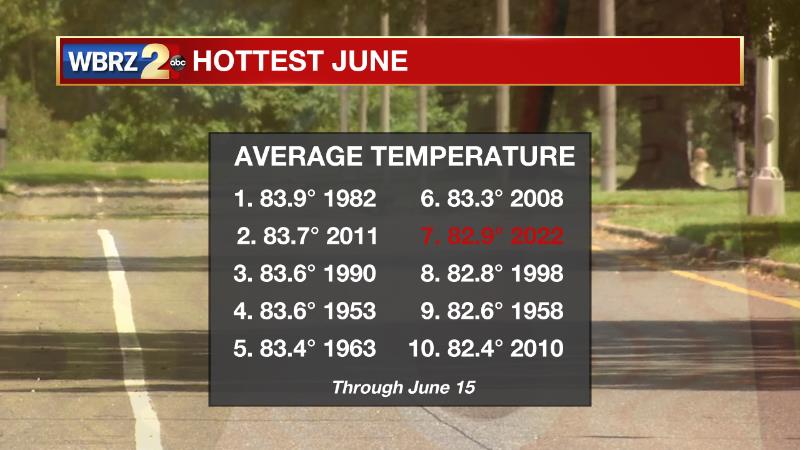 Stay ahead of summer heat on the Storm Station. We'll continue to let you know where this season is stacking up while bringing all of your weather updates on News 2, wbrz.com, and the WBRZ WX App on your Apple or Android device. Follow WBRZ Weather on Facebook and Twitter for even more weather updates while you are on the go.