Wednesday PM Forecast: periods of heavy rain to round out the workweek

After multiple days with mainly dry conditions, rain is back in the forecast. Have the WBRZ WX App activated to get nearby rain alerts and know about any advisories or warnings issued due to flooding.

Next 24 Hours: A cluster of showers and thunderstorms will drift into the region from the northwest into the evening hours. While these storms will be on a weakening trend after nightfall, there should be enough heat energy left in the atmosphere for one or two spots to experience gusty wind—especially north and west of Baton Rouge. Beyond any pop of rain, the majority of the time overnight will be quiet with low temperatures in the mid 70s. A much more active weather pattern will begin on Thursday. After a high temperature in the upper 80s, a weak front will cause more clouds and numerous showers and thunderstorms to develop across the forecast area. Some of the storms could produce heavy rain leading to street and poor drainage flooding. Unfortunately, a lot of the action is pegged for the afternoon hours, meaning the commute home from work and school may be slowed.

Up Next: A tropical air mass will stay in place through Saturday. Weak disturbances in the atmosphere will help to kick out scattered or widespread showers and thunderstorms both Friday and Saturday. Again, like previous episodes this summer, some localized street and poor drainage flooding could occur. The added clouds and rain will keep high temperatures in the mid to upper 80s. While there could be a short stretch of “normal” summer weather on Sunday, a rather wet pattern seems to be in the works for next week as well. CLICK HERE for your detailed 7-Day Forecast. 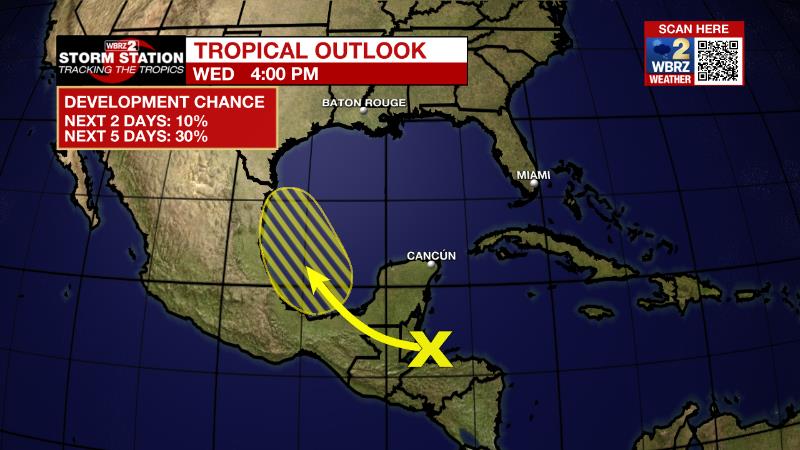 The Tropics: A tropical wave over the northwestern Caribbean Sea is forecast to move across Central America during the next couple of days and emerge over the Bay of Campeche, where the is a 30 percent chance of development  while it moves northwestward over the southwestern Gulf of Mexico through the weekend.

Aug. 17, 2022 -- for the first time in 2+ #hurricane seasons, we are at a point in the calendar where observed tropical activity has been below average to date. pic.twitter.com/dYcLTlXMzc

The Explanation Deep tropical moisture is beginning to fill back into the atmosphere across our region as a weak front drops south of I-20 toward the I-10 corridor. A line of thunderstorms may try to fill in along this front as it and associated thunderstorm outflow moves into an "untapped" and unstable atmosphere. This would allow thunderstorms to propagate south, even past nightfall. Any storm could produce gusty wind this evening. With the front in close proximity to the state line on Thursday, the local area will be the launching point for convection. Soon after the sun is up and temperatures begin warming, showers and thunderstorms will pop around the area. With moisture surging even higher, thunderstorms will be capable of downpours and localized flooding. The Weather Prediction Center has highlighted much of the area in a Level 2/4 risk for excessive rainfall. While the front will began to fall apart and even drift north, upper level winds out of the southwest will continue to pump moisture into the region and send numerous disturbances through. These features will generate the lift needed for continued rounds of showers and thunderstorms. Due to this, you can expect some rain and "off-peak" times, with Friday morning being one example. More of the same is expected Saturday and mayeb to a lesser extent on Sunday before the next big weather feature moves into the region. A strong, upper level trough of low pressure will dip into the Lower Midwest by Monday with yet another poorly defined front drifting into the region. Tropical moisture remaining in place, enhanced lift due to southwest flow on the east side of the upper level trough and the weak front will all aid in scattered to widespread showers and thunderstorms each day through the first half of next week.

The Storm Station is here for you, on every platform. Your weather updates can be found on News 2, wbrz.com, and the WBRZ WX App on your Apple or Android device. Follow WBRZ Weather on Facebook and Twitter for even more weather updates while you are on the go.